I'm a bit of a homebody.

It was -2°C with scattered clouds. There was moderate breeze.

I realized this week that many of the posts on Hi are of people’s goings to and from places and that most of mine are at home. It’s because my daily commute consists of walking downstairs and down a hallway into my studio. It’s because so much of my work comes to me instead of me going to it.

Lately most of my out of the house expeditions have been for bodywork appointments. A couple months ago I had a spasm in the front of my neck which pulled my hyoid bone1 out of place and started to affect my voice. I went from a happy two and half or three octave vocal range down to less than an octave. Not a good thing when I have a new piece to present soon! I went to my doctor who recommended physiotherapy and massage therapy and also put in a request for an appointment with the otolaryngologist. I’m still waiting on the otolaryngologist2 .

So the twice-weekly bodywork appointments began. I also called my chiropractor, who I hadn’t seen for over a year. The photo above is from his office (which was my outing today). My chiropractor is not the “let me crunch your bones and twist your neck” kind of chiropractor but rather the “let me twist and press and pull your muscles and bones back into place” kind of chiropractor. He also teaches Aikido (that black and white photo in the photo above is him getting thrown), has taken a voice workshop with me, and has seen me perform so he knows what sort of demands I put on my body and my voice.

A month and a half and a lot of appointments and exercises at home later I have my full range back! My vocal endurance and stamina is not what it was but I know that with slow, gentle, and patient work on the part of my bodyworkers and I that it will return quickly.

But once I’m healed from this injury, what will get me out of the house? 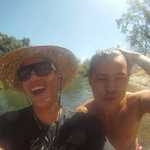 Brandon, Mark, Victoria, David Wade and 3 others said thanks.