It was 12.8°C with scattered clouds. The wind was light.

All I knew then was that there’d soon be a long summer road trip, during which a group of us would eventually cross into Canada. I still don’t know how — of all things for people who didn’t know each other that well to do — we chose to drive from here to New York City. After that, nothing happened for a while. Then suddenly, one night three dudes were sitting around, bored, and we decided we’d go to India for Christmas and New Year. I think that was September 2009.

Some more time passed and I got the courage to see Vietnam by myself, except I wound up not being by myself at all. Came back with a girlfriend, actually. August 2011. So then, I decided to come back to grad school, and then came some of the saddest times of my life due to uncertainty and aimlessness, and let’s not talk about that now, but it did lead me to that night in May 2012 when I went full dgaf and said “let’s go to Paris, babe.”

Recently I was told I’ve been “so wanderlusty” in the last few months, but no, 2012-2015 actually did “wanderlusty” justice.

Saw a few more countries, bused and railed across a bunch of cities, including Delhi to Jaipur when 6am was way too early to find a ginormous rat playing in the luggage compartment above your head. I froze until the Indian dude across the aisle got up and started whacking around with a newspaper like it’s his workout.

Too many good memories to smile at, and some bad ones I don’t care to remember. This is a lot of words just to say that that passport is expiring, and a new one just came home. 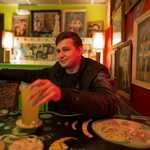 Other moments in Santa Ana