You don't realize, he said to his 20 year old cousin, that your parents are no more messed up than you will be.

His uncle had died, that’s what was going on. The service had been that morning, an awkward affair for many reasons, not least because he hadn’t seen that part of his family for years. This didn’t really sadden him, the not seeing them part, but it definitely felt strange. Here he was reflecting upon one the more intense things a human can reflect upon—and he was doing it with people he didn’t really know.

Later, after the service and luncheon, he sat with his cousin. They sat on the stoop outside his aunt and uncle’s home. His cousin had a beer, though he couldn’t be old enough for it. He didn’t know his age really. His cousin had been born a lot later than he had. In fact, his cousin was about the same age as his stepson, about 19.

Strange that he wouldn’t tolerate his stepson with a beer, at least not without a grimace. But here, with his 19 or 20 year old cousin, he encouraged and welcomed the camaraderie.

“How’s your Mom doing?” he asked his cousin. The autumn night didn’t yet have a chill and they both sat outside in their shirtsleeves.

“Mom’s fine. Same.” his cousin said after a sip.

“She’s been dealing with this a while.”

His cousin laughed. And then he told his cousin a few stories about his dad from before his cousin was born. Mostly, they involved his uncle’s mustache, a thing of real stature which made him seem like a Television star.

“Once, he saved me from drowning,” he said, which sounded like a lie, but was almost the truth. His cousin liked these stories/ They didn’t sync up exactly with his vision of his dad, but he liked them.

“He sold springs,” his cousin said.

“Yeah, like all sorts of springs. For trampolines and bed frames and those bells that go on bikes and stuff like that.”

“Slinky is it’s own thing. It’s not a type of spring.”

And his cousin told him about how his father couldn’t accept that he wasn’t a success. That he gave off the scent of success, but it was a evolutionary mechanism like a butterfly’s patterns or a chameleon’s skin. He wasn’t a bad guy, his cousin said, he just wasn’t a particularly spectacular one.

And he thought about this and he took a sip of his beer and looked at the completely unspectacular Cincinnati sky.

He wondered if he gave off a scent of success.

You don’t realize, he said to his 19 or 20 year old cousin, that your parents are no more messed up than you will become.

Liked that moment?
Subscribe to Matthew and get their extensions as they publish them. 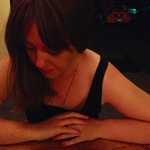 Cassie and Maria said thanks.

A jack of some trades: youwillnotbelieve.us

Other moments in Cincinnati