What Do Insects in Dreams Mean?

Bugs have survived, evolved and adapted for millions of years, before humans even existed, yet most humans still consider them inferior. Insects are diverse and resilient, throughout history they’ve served as symbols for anything and everything – from beauty and elite, to pestilence and misfortune. Insects play a huge part in our human-animal lives – they pollinate or devour crops, provide textiles, act as natural biological control on which our whole nature’s balance depends, contribute to genetics research and advance human health or vector disease. In fact, they inhabit almost every little crack of earth – from the soil to deep marine and even inside humans. So their incorporation into our dreams comes as no surprise. If you have ever wondered what is the meaning of dreams, and more importantly what do insects symbolise when invading our dreams.

Dreams are a universal phenomenon that occurs mostly in the rapid-eye-movement (REM) stage of sleep when brain activity is high and resembles that of being awake. Dreams can be described as a sequence of images, ideas, emotions and sensations that occur involuntarily in the mind, varying in length, count or type. The meaning and purpose of dreams have not yet been fully understood, but to understand the significance of insects in dreams, we must first do our best to understand the significance of dreams. 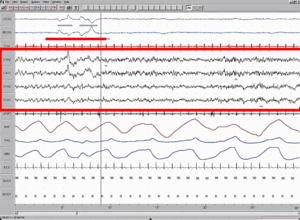 EEG of brainwaves during REM sleep

Throughout history dreams have been a topic of scientific research and speculation, as well as subject of philosophical and religious interest. Opinions about the meaning of dreams have differentiated through cultures and historic times. The first recorded dreams were found to be dating back about 5000 years in Mesopotamia, where they were documented onto clay tablets. Nowadays, dreams have been connected with different scientific theories about the unknown of the unconscious mind by examining the behaviour and physiology of dreaming. Here’s a little fact sheet of what we know about dreaming:

The search for the function and meaning behind dreams have occupied the time of biologists, psychologists, anthropologists, artists and philosophers. While specifically dreams featuring insects have been of special interest to medical practitioners, psychotherapists, writers etc. This interest is probably summed up to the fact that the most common human response to insects is that of fear, avoidance or even disgust. Interpretations of Insects in Dreams

Today, you can find all kinds of different books, websites or apps that claim to hold the right key to explaining the meaning of your dreams. However, this is a joint effort – collecting what is available in websites as well as written and illustrated books on dream meanings. Remember, sometimes your brain is just setting you up with familiar images in surrealistic settings, just to fuck with you. Only option then is to deal.

The dragonflies in your dream symbolise change, regeneration, instability, flightiness; or being consumed by passion even at risk of offending and hurting other people’s feelings.

If grasshoppers are present in your dream, they are bringers of freedom, independence, spiritual enlightenment, inability to settle down or commit to a decision. Analyse.

Whether it’s a cricket or plural crickets, there’s one thing that follows them which you need to do: introspection. To analyse this you must take in mind your whole dream, was it positive or negative? What role did “crickets” a.k.a. introspection play? If you have noticed a specific species of crickets, such as the katydids, their meaning is entirely different – missing out on opportunities due to laid back attitude.

It comes as no surprise, but termites are as scary in dreams as they are in real life. You know all that money for a removal treatment.. all the damage. Makes you cringe doesn’t it? Well termites meaning in dreams is similar – symbolising an attack on your soul or your being.

Strikes again an insect with obvious dream symbolic. What do you think about when you picture cockroaches? A little shiver passes through your body first, maybe? Uncleanliness? Longevity? Persistence? Renewal? Whoa, yes, these are actually the dream meanings of cockroaches. Other meaning is also the aspect of oneself that needs to be confronted. Much like cockroach control.

It’s complicated with beetles because there are too many species! Explaining their meaning spreads in two directions: one is negative, includes destructive influences at work, values and beliefs being compromised or loss & unemployment. The second is positive, if engaging in dirty or ignoble actions – success. This is an easy one, ladybugs in dreams mean beauty and good luck. You probably get a pleasant feeling thinking or seeing butterflies, unless you’re one of those weird people who just hate any insect, no matter how appealing. Well these mental feelings in real life are transferred with the same symbolic meaning into dreams. Hence, butterflies most likely mean creativity, romance, joy, spirituality, need to settle down or undergoing a transformation. Other not so pleasant dream interpretations of this beautiful insect are the lack of fixed purpose, restlessness and inconsistency.

Moths are as beautiful as butterflies, but there is some sort of stigma towards them. Maybe because they are considered a pest. This of course transfers into their meaning in dreams. Weakness, character flaws, unnoticed irritation that may not surface until it’s too late – these are one side of their interpretations. Another, gypsy interpretation is about a love affair in which the dreamer suffers betrayal.

Bedbugs are the kind of parasitic insects you don’t want to see neither in real life nor in your dreams. Not only do they suck your blood, demand emergency bedbug treatment measures, but they also have the audacity to symbolise disgrace in your dreams. Huh!

Everything in dreams is connected with waking life. Fleas are a toughie. Tough to get rid of, tough to kill, tough to catch.. In addition, their presence in dreams is also not easy to explain. The most basic analysis of these parasites is being provoked into anger and manipulated to revenge by someone close to you. Other dream interpretations are focused on the role fleas play in your dream: Thank you for reading!

Liked that moment?
Subscribe to Lorelai and get their extensions as they publish them.