Or at least I probably should be. This picture didn’t turn out well due to my untimely disruption of the courtship ritual of the reclusive Superb Lyrebird. Here I was with camera lens peering through dense foliage just as the male erected what Wikipedia, without hyperbole, describes as “the most elegant of all tails”. Unfortunately, the instant before releasing the shutter, I stepped on a twig, the breaking of which echoed loudly and abrasively through the dark forest. The bird’s intricate mating song ceased abruptly as both birds, all in a blur, fled the courtship mound, female to the left and male to the right, backward stepping with silvery white tail feathers still draped elegantly over his head.

If you want to play “Where’s Waldo?” for the female bird, turn your computer screen to it highest brightness. In the upper centre of the image, you may be able to see her brown body, the size of a pheasant, with a few long tail feathers stretching back to just barely overlap with the male.

If you don’t know anything about this bird, check it out here:
(http://en.wikipedia.or/wiki/File:Superb_Lyrebird_mound_dance.jpg) and for its talents as a mimic, check here: (http://www.youtube.com/watch?v=VjE0Kdfos4Y)

And if you want to know how the Lyrebird got it’s voice, here is the story as told by Uncle Wes Marne, Biduginbul Elder of New South Wales. It remains his intellectual property. By the way, if you think this is a children’s story, in a way it is. Exactly in the way that Adam and Eve is a children’s story. In any case, it is a lovely narrative, well told, with touches of science in it — more science, I would say, than you are likely to find in Genesis.

‘This land is the oldest land.

The first bit of dirt came out of the ocean millions of years ago. Biami decided now was the time to put everything on the land that it needed. So he called in the four winds and gave them seed, and from the seeds everything grew - shrubs, grasses, trees and flowers.

He said, “Little brown bird, you’re special and because you’re special I’m going to give you a gift, the gift of dance. You’ll be the best dancer ever seen in the bush, I’m also going to give you the gift to copy any sound you hear, there’ll be no sound you can’t copy.” You know that little bird is still in the bush today…..and it’s the lyrebird.’

Uncle Wes Marne is pretty close to right, when he suggests that Lyrebird was the first bird. It is known in the fossil record from 15 million years ago. BTW, my own Lyrebird misadventure took place early this morning at Olinda in the Dandenong Ranges on the very edge of Melbourne. REFERENCES: http://ab-ed.boardofstudies.nsw.edu.au/go/7-10/science/units/story-4/reflective-journal/uncle-wes-marne 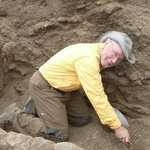 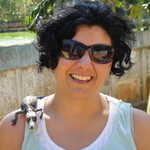 Steve, Paul, Christine, Cassie and 7 others said thanks.

Other moments in Olinda