One of the most iconic views in the world.

To round off our several weeks of round the world travel, myself and Greg finished up in Hong Kong, one of my favourite cities in the world and one which I hadn’t visited for 12 years. It had changed a huge amount, yet was somehow still quite familiar.

Although this is the most common shot of Hong Kong, that’s no reason not to take it, so we headed up to the peak (Victoria Peak) on the tram nice and early. If you haven’t been on the tram, do it. If you have been on it once, never ever do it again; the queues are hideous.

At the top, we scouted the best location on the viewing platform and set up our tripods. We spent hours up there watching the light change and also trying to get our cameras in the right position. To get the railing out of the way, you need to extend the tripod neck out, but go too far and there is a huge channel of wind that will probably take your head off, let alone shake your camera a bit.

The Hong Kong skyline is fantastic from here. You can see buildings like The Bank of China, the International Finance Centre and the new and huge International Commerce Centre. In fact, the latter was almost next to our hostel. For those of you that know Hong Kong, our hostel was in the magnificent grandeur that is the Chungking Mansions. Yes, we’re that fancy. At least it’s opposite Tsim Sha Tsui Station (which I had to keep pronouncing for Greg).

I want to say a big thank you to my uni friend Bex, who took us out every night we were there, lent us money and showed us a fantastic time. We saw some of the most awful going out streets in the world (Lan Kwai Fong), but also found some amazing places like a little speakeasy we ended up in one evening / morning. 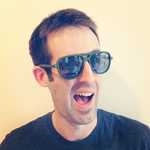 Marcus, Ragini, Adrian, Greg and 5 others said thanks.